SoundExchange pays out almost $1 billion a year. But there are countless artists who don’t collect their payments because they didn’t register, or they forgot some important detail, or they just don’t know that SoundExchange owes them money.

SoundExchange is a non-profit organization that collects royalties from non-interactive streaming services such as SiriusXM, then pays those royalties to performers (Featured Artists) and copyright owners (Rights Owners).

Essentially, SoundExchange takes money from the broadcasters and sends it to the artists and producers.

How Does SoundExchange Work?

When SiriusXM and other broadcasters play music content, the law requires them to pay for its use. On a regular basis, they send SoundExchange a detailed playlist showing exactly which songs have been played and how many times. They also send a payment for the use of those songs.

SoundExchange distributes the payment among the various artists and producers on that playlist in the form of royalties.

Who Does SoundExchange Pay?

SoundExchange distributes 45% of royalties to featured artists, 50% to copyright owners (mainly labels and producers), and 5% to non-featured artists (such as backup musicians and session players).

Here’s how it breaks down: 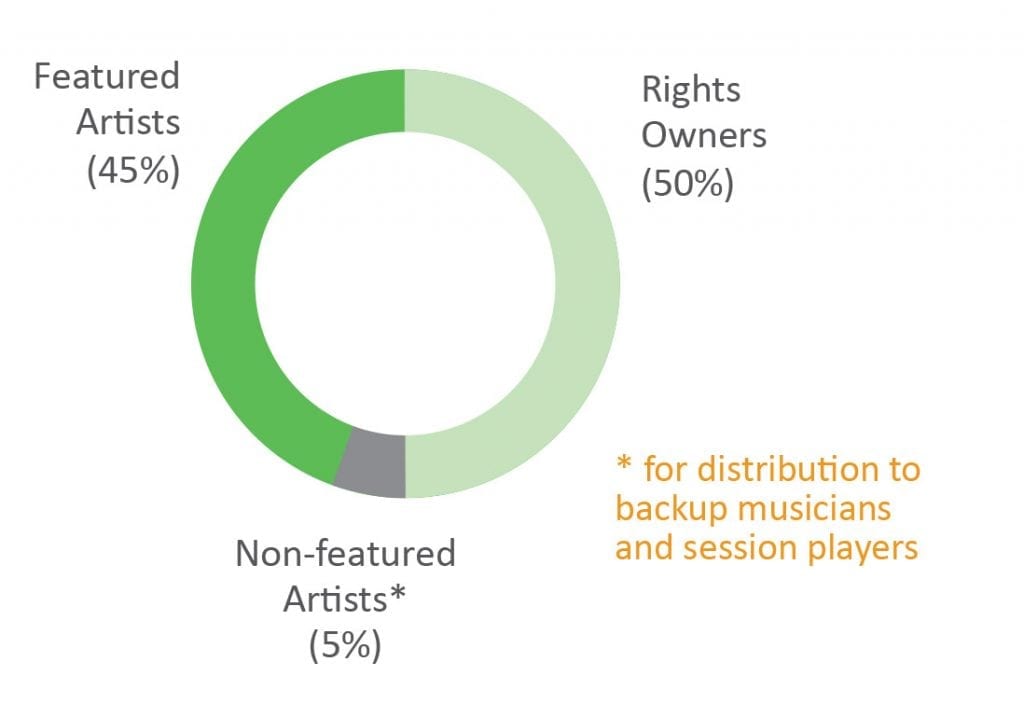 Half of the royalties for Non-Featured Artists go through the American Federation of Musicians (AFM) for non-featured musicians. The other half goes through SAG-AFTRA for non-featured vocalists.

When Does SoundExchange Pay Royalties?

SoundExchange sends out payments on a regular quarterly or monthly schedule.

The default payment schedule is quarterly. These payments go out by check on the last Thursday of March, June, September, and December.

You can also register with SoundExchange to get monthly payments by direct deposit on the last Thursday of every month.

To learn more about when you will get your SoundExchange royalties, click here.

What Are SoundExchange Royalties?

ShineX only tracks SDARS royalties because they pay nearly $50 per spin. The exact amount paid will fluctuate every month, but it’s generally between $47 – $49 per spin, divided between the artists and rights owners.

What are SDARS royalties?

SDARS royalties are generated when your songs spin on SiriusXM’s satellite radio stream. They pay between $47 and $49 per spin.

Why do SDARS royalties pay so much more than everything else?

The law requires that SiriusXM must pay 15.5% of their gross revenue to SoundExchange. Since SiriusXM has 34.9 million subscribers, each paying an average of $220 per year, SiriusXM brings in a gross revenue of about $8 billion.

By law, 15.5% of that total (more than $1 billion) has to go to SoundExchange, and they have to pay it out as royalties to the artists and rights owners.

Why does ShineX only track SDARS royalties from SoundExchange?

ShineX tracks your SDARS royalties because that’s where the real money is. All of the other license types combined don’t come anywhere close to what SDARS royalties pay.

Here’s a real-life example of one artist’s royalty statement. You can see how SDARS royalties account for almost everything they earned.

Why are my royalties higher than expected?

If your songs are spinning on SiriusXM, then SDARS royalties will probably account for 99% of your earnings from SoundExchange.

The only other significant royalties you could get would be Foreign Royalties or Admin True Up.

Foreign royalties come from songs that have played in other countries outside of North America, which ShineX doesn’t track.

If you received either of these types of payments, your royalty payment may be higher than expected. But that’s a good thing!

How do I get my SDARS royalties?

In order to start receiving SDARS payments, first you need to register with SoundExchange and claim your songs.

ShineX will show you a complete list of your songs that are spinning on satellite radio. Then you can claim them on SoundExchange and get paid for all of your spins.

How do I know how many spins I’m getting on satellite radio?

ShineX is the only tool that tracks your spins on SiriusXM and calculates your SDARS royalties, so you can make sure you’re being paid all the money your songs earn.

Want to join the discussion?
Feel free to contribute!

When Does SoundExchange Pay Royalties? Identity Confirmation : Examples of proof
Scroll to top